Home Mental Health When Anxiety Crashes Into Your Professional Life

For years, I used to sit in my psychotherapy sessions and jiggle my leg. I was in constant motion. I was anxious all the time. Digging deep into my psyche, recalling painful experiences, and coming to difficult realizations all made me fraught with anxiety. My former therapist and psychiatrist, Dr. Lev, didn’t particularly want me pacing around her office — that would have been discharging my feelings into action rather than speaking about them — so I did the next best thing: I swung one leg over the other and I swung the loose one back and forth for the entire 50-minute session.

Toward the end of the 11 years Dr. Lev and I worked together, I realized I was no longer in constant motion. I looked down at my legs in surprise.

“What happened?” I asked

“You no longer feel the need to run,” Dr. L. replied

Recently I realized I was doing the same thing under my desk during my Zoom sessions. I don’t think I’m running from my clients, per se, I believe I’m running from the pressure I’m putting on myself. I also was jiggling my leg during my three-hour Zoom entrepreneurship class after work last night. If I’m standing in line at Target or the supermarket, I raise myself up on my tiptoes, come back down until my heels touch the ground, and keep going up and down, until my turn with the cashier. Weird, huh? Even as I write this, one leg is jiggling.

I asked Dr. Lev for a “booster session,” as I like to call them — only my second this year, but with my new schedule, I wasn’t able to make the times she had available. I think she stopped asking, but I’m going to e-mail her again. I have an idea for a new project and part of me is asking myself, Don’t you have enough to do?, and the other part is saying, But this is so cool. How much extra work could it be?

I close my eyes and recall how hard my mom worked at building her business and feel as though I have to do the same. I don’t know why, but I feel as though I owe her something. I know she is watching me, guiding me, and cheering me on, and I cannot disappoint her again. 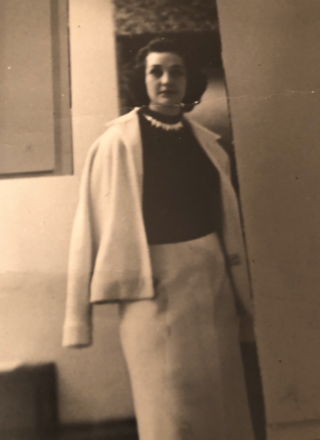 I don’t know what hopes and dreams she had for me, her firstborn, her only daughter. For a career, for marriage, for grandchildren — some of which never got realized, one of which was delayed. I’m sure when she named her infant girl, and pictured her future, it did not include severe mental illness.

I know your love for me was unconditional. My biggest regret was that we never got to have a relationship as two emotionally healthy adult women – and of course, mother and daughter.

Don’t ever think you weren’t a good role model for me. You were the best. Brilliant, independent, empowered. I don’t think I could have started my business if I didn’t have you to look up to.

I will always miss you and love you.