In the spring of 2019, on the first anniversary of my stroke, I rescued my dog, Shelby. She originally came from a kill shelter in Mississippi but was being fostered by a family in New Jersey.

I was attracted to her photo because one ear stood straight up and one ear curled forward, and I get a kick when people are asymmetrical, and I guess dogs too.

Her profile said she was good with people, children, other dogs, and cats – none of which would turn out to be true. I made arrangements to pick up Shelby from the foster mom in the parking lot of a supermarket in New Jersey. She gave me a quick hug and said, “Thank you for taking her.” She handed me the leash and was gone. I thought that was a bit strange. Shelby hopped up on my back seat and seemed to enjoy the car ride back to Westchester. She slept with me on my bed the first night. I was in heaven.

Definitely not good with people. I live in a large condo building. She barked, growled, snapped, and lunged at all my neighbors. I would get a call from the managing agent that the Board had gotten complaints that Shelby is “vicious,” and the Board had the power to tell me to get rid of her. I burst into tears.

The dog trainer I was working with suggested putting her on a low dose of Prozac, which the vet prescribed. Within a week, the difference was dramatic. She was no longer snapping and lunging at people.

In three months, with further training, she had transformed. She rarely growled, and she was constantly wagging her tail. She even seemed to have a smile on her face.

A year later, the building staff – the doorman and the super commented on how much she had improved. People were no longer afraid to get in the elevator with her. There was no more talk from the Board. 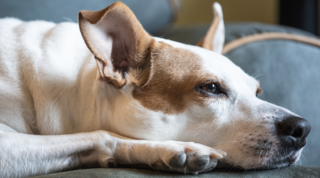 She remains reactive to other dogs. When she sees another dog, she barks, twirls around, and sometimes she pulls forward, going up on her hind legs.

She can be hard to control. My dog walker thinks it’s protective behavior because she doesn’t act this way when Shelby goes out with her. She’s protecting me.

When the pandemic hit, and we went into lockdown, thank God I had her. At first, I believed I’d be okay because I’m a dedicated introvert, and I need a lot of alone time regardless to recharge. But as the lockdown dragged on and Zoom meetings with my friends became a poor substitute for real-life contact, I became depressed. I was working from home, and since we had stopped going into the field, all we were doing was telephonic contact with our clients. Most of them didn’t have computers or smartphones.

My only reason for leaving the apartment was to walk Shelby. If I didn’t have her, days without leaving the apartment could easily have turned into weeks. I have heavy blackout curtains I tend to keep closed because of my severe migraines. It rarely occurs to me to open them. I could have gone for weeks without even seeing the sun.

Shelby and I were meant for each other, and somehow, we found each other. We are both broken in our own way, as evidenced by our being prescribed antidepressants. She has a history of trauma, and my history isn’t too stellar. I believe this is the first loving home she has had, and she gives unconditional love back to me a thousand-fold. 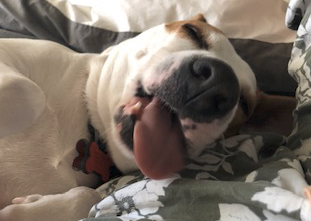 No one sees what life is like when it’s just she and I alone. She is absolutely the sweetest girl.

Click here for an infographic on the Top 5 Mental Health Benefits of Having a Pet.

Thanks for reading. Andrea