Are you searching for astute depression quotes that will introduce you to your insightful journey?

Depression is a mental state where you persistently face depressed mood swings and loss of interest in life and activities. It is a state where people feel shy to open up and discuss. Many people consider it a serious mental disorder, while some consider it as a common problem faced by people these days.

People often feel they are left alone, even in a crowd of people & no one is there who can understand them.

Depression is an emotion faced by people at the time they start thinking they are alienated and start seeing darkness all around.

Here are some of the best thrilling Depression quotes that will not only make you feel understood, think or act; but will also let you know that you are not alone in this world.

“Depression is being colour-blind and constantly told how colourful the world is.”

“It is very hard to explain to people who have never known serious depression or anxiety the sheer continuous intensity of it. There is no off switch.” – Matt Haig

“Depression, suffering and anger are all part of being human.” – Janet Fitch

“It’s impossible to think right and make decisions when you’re severely depressed. So always keep that in mind.”

“In the end, we will remember not the words of our enemies, but the silence of our friends.” – Martin Luther

“There are wounds that never show on the body that are deeper and more hurtful than anything that bleeds.” ― Laurell K. Hamilton

“Depression on my left. Loneliness on my right. They don’t need to show me their badges. I know these guys very well.” ― Elizabeth Gilbert

“Maybe we all have darkness inside us and some of us are better at dealing with it than others.” ― Jasmine Warga

“No one realizes how strong someone with depression has to be just to do daily stuff like shower, brush hair or get out of bed.”

“I found that with depression, one of the most important things you could realize is that you’re not alone.” — Dwayne Johnson

“I wanted to write down exactly what I felt but somehow the paper stayed empty and I could not have described it any better.”

“A big part of depression is feeling really lonely, even if you’re in a room full of a million people.” 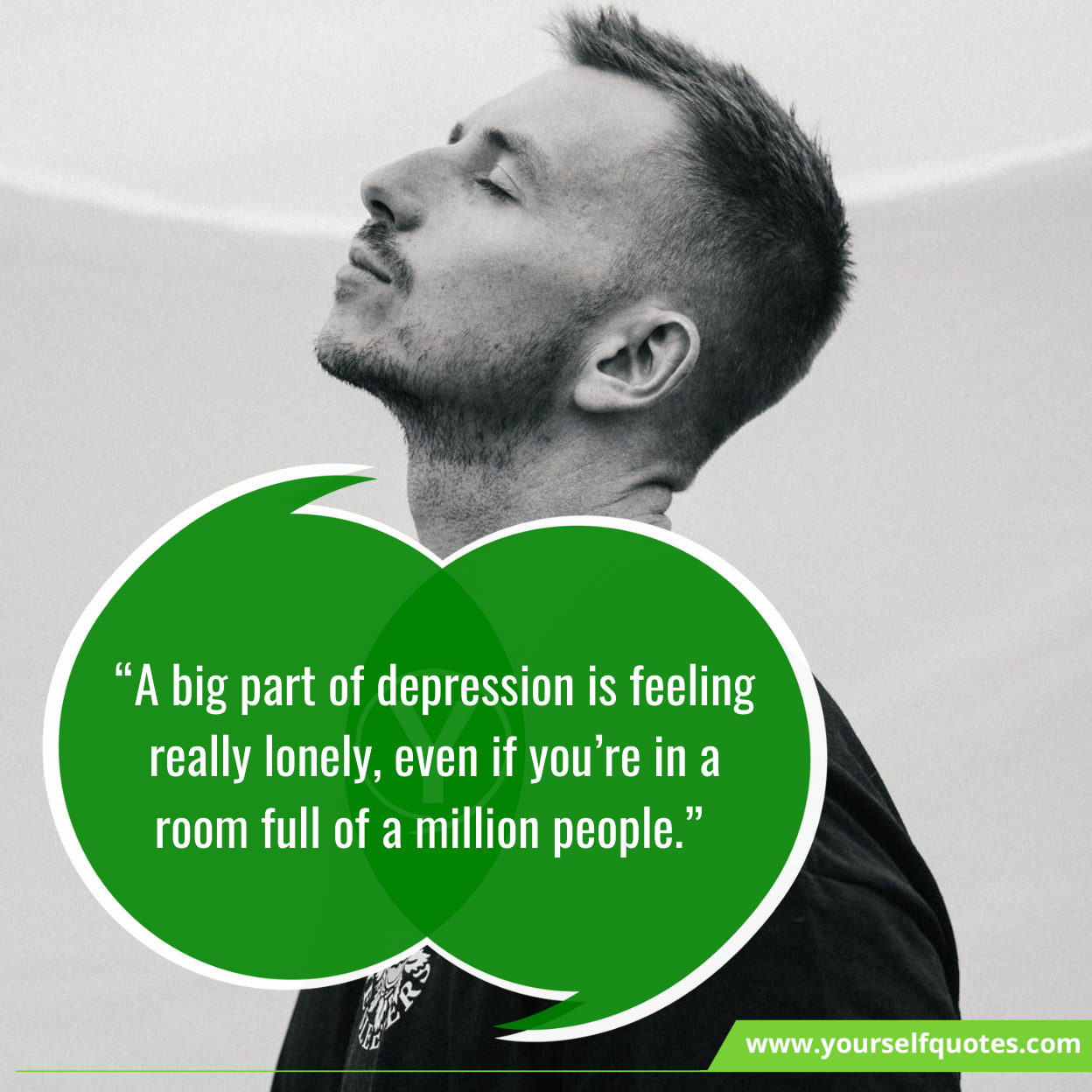 “I go through a lot of depression, and I know other people do, too, but I have an outlet that so many people don’t. If you have that inside of you and can’t get it out, what do you do.”

“We hide to try our feelings, but we forget that our eyes speak.”

“Today my forest is dark. The trees are sad and all the butterflies have broken wings.”

“What people never understand is that depression isn’t about the outside; it’s about the inside.”

“Mental illness is so much more complicated than any pill that any mortal could invent.”

“Depression, for me, has been a couple of different things – but the first time I felt it, I felt helpless, hopeless, and things I had never felt before. I lost myself and my will to live.” — Ginger Zee

“When people don’t know exactly what depression is, they can be judgmental.” – Marion Cotillard

“Depression makes you want to hide inside yourself. But hiding your feelings (or lack of feeling, numbness) won’t help you get well.”

“Keep yourself busy if you want to avoid depression. For me, inactivity is the enemy.” – Matt Lucas

“Mental illness is so much more complicated than any pill that any mortal could invent.” 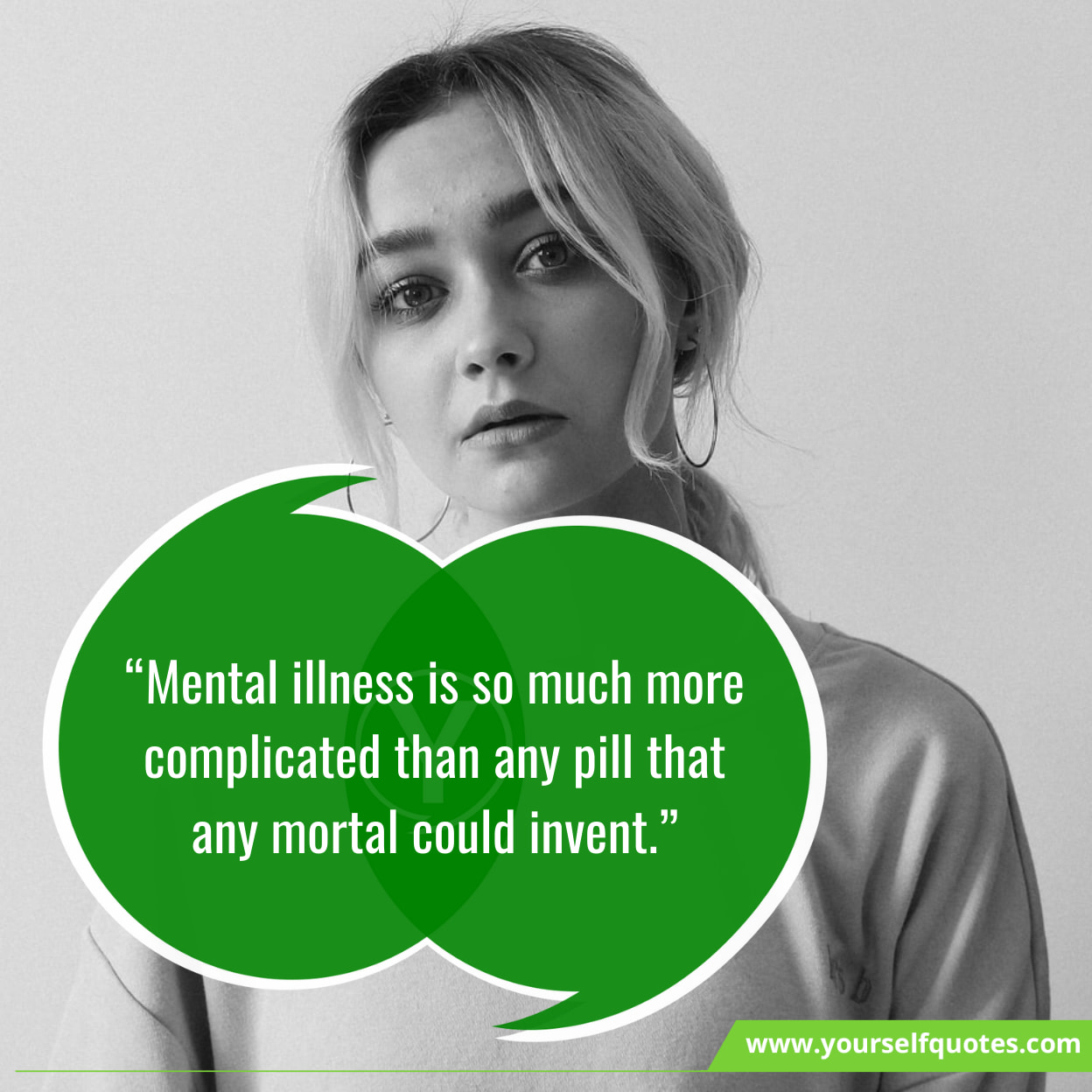 “Hold on to this hope: You can get better from depression.”

“I’ll never forget how the depression and loneliness felt good and bad at the same time. Still does.”― Henry Rollins

“You look happy, but you don’t feel happy. That’s what depression does to you.”

“I have depression. But I prefer to say, ‘I battle’ depression instead of ‘I suffer’ with it. Because depression hits, but I hit back. Battle on.”

“When you suffer from depression, ‘I’m tired’ means a permanent state of exhaustion that sleep doesn’t fix.”

“A positive mental attitude can be difficult to muster when you’re depressed. Some days will be just as the above depression quote says: pretty miserable. But those days won’t last forever.

“Did you know that forcing yourself to be happy is a warning sign of depression? Talk about your feelings. Don’t force that smile.”

“I have depression. But I prefer to say “I battle” depression instead of “I suffer” with it. Because depression hits, but I hit back. Battle on.” 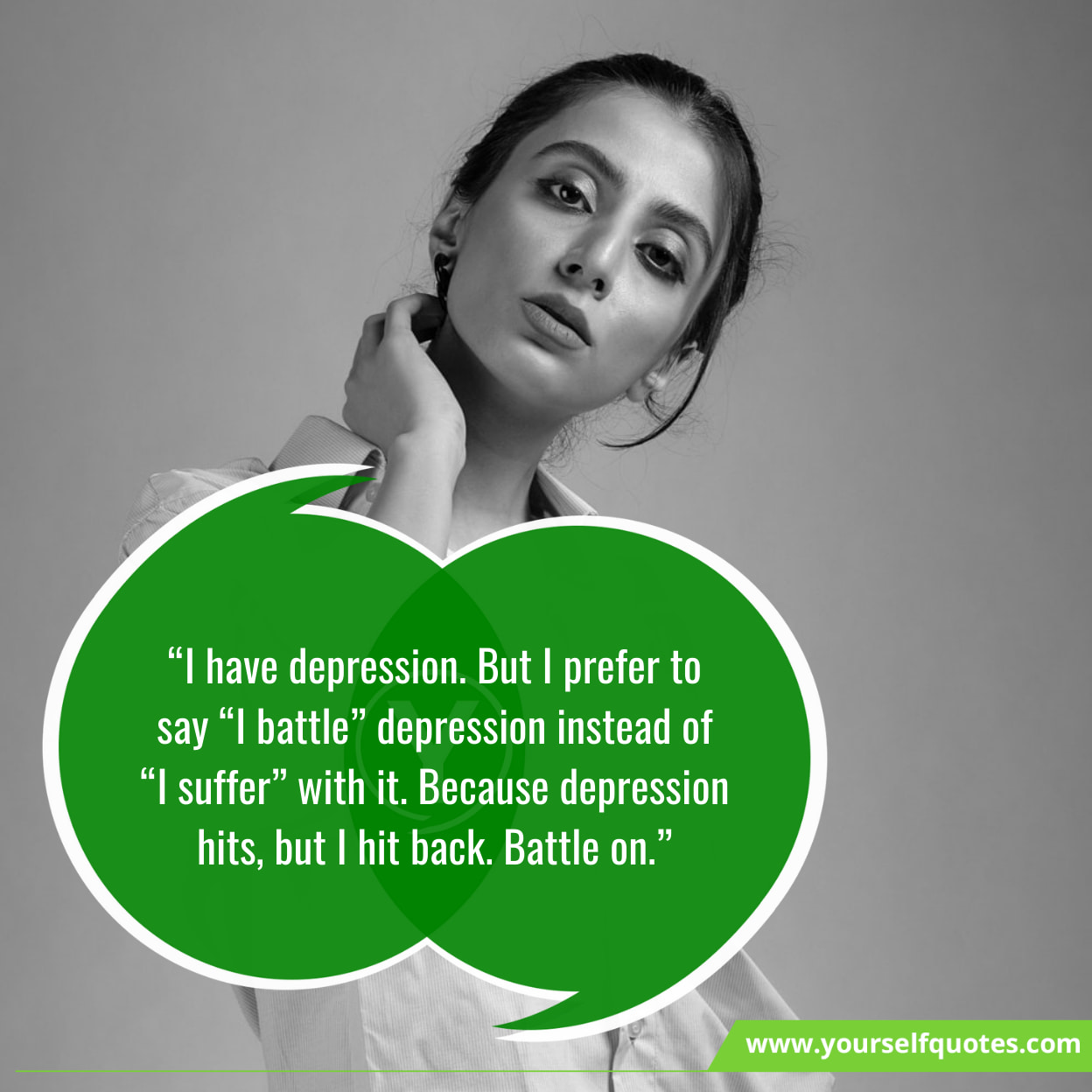 “If you know someone who’s depressed, please resolve never to ask them why. Depression isn’t a straightforward response to a bad situation; depression just is, like the weather.”

“Whenever I have a good few months and I think I’ve got over the worst on my depression, it silently returns. This isn’t a battle I asked to fight. I’m tired of knowing it’s always coming back.”

“I am terrified by this dark thing That sleeps in me; All day I feel its soft, feathery turnings, its malignity.” ― Sylvia Plath

“Depression is like a bruise that never goes away. A bruise in your mind. You just got to be careful not to touch it where it hurts. It’s always there, though.”

“If you could read my mind, you wouldn’t be smiling.”

“Maybe you have to know the darkness before you can appreciate the light.” – Madeleine L’Engle

“Good humour is a tonic for mind and body. It is the best antidote for anxiety and depression. It is a business asset. It attracts and keeps friends.” – Greenville Kleisser

“They always call depression the blues, but I would have been happy to wake to a periwinkle outlook. Depression to me is urine yellow, washed out, exhausted miles of weak piss.”― Gillian Flynn

“The hardest thing about depression is that it is addictive. It begins to feel uncomfortable not to be depressed. You feel guilty for feeling happy.” ― Pete Wentz

“Perhaps depression is caused by asking oneself too many unanswerable questions.”― Miriam Toews 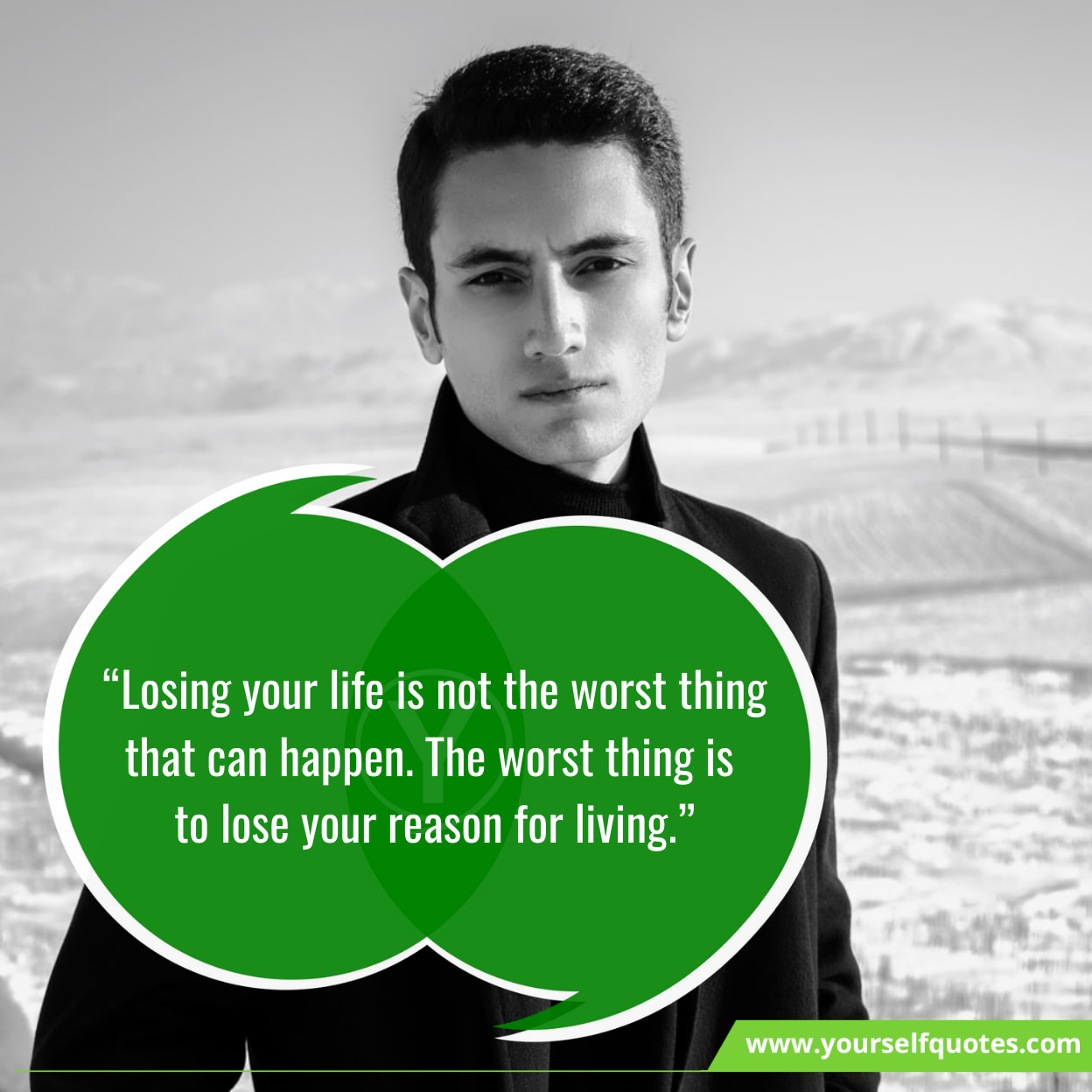 “In the silence of the night, I have often wished for just a few words of love from one man, rather than the applause of thousands of people.” ― Judy Garland

“Dead, but not allowed to die. Alive, but as good as dead.”― Suzanne Collins

“Almost everyone is overconfident—except the people who are depressed, and they tend to be realists.” ― Joseph T. Hallina

“There are wounds that never show on the body that are deeper and more hurtful than anything that bleeds.”

“No one realizes how strong someone with depression has to be just to do daily stuff like shower, brush hair or get out of bed.”

“There are wounds that never show on the body that are deeper and more hurtful than anything that bleeds.” – Laurell K. Hamilton

“Every man has his secret sorrows which the world knows not, and often times we call a man cold when he is only sad.” – Henry Wadsworth Longfellow

“Noble deeds and hot baths are the best cures for depression.” – Dodie Smith

“Depression to me feels like a heavy blanket. it covers all of me and it’s so hard to get up. But there’s comfort in it too – I Know who I am when I am under it.”

“Depression on my left, Loneliness on my right, they don’t need to show me their badges. I know these guys very well.” – Elizabeth Gilbert

“Depression is living in a body that fights to survive, with a mind that wants to die.”

“One day, in retrospect, the years of struggle will strike you as the most beautiful.” – Sigmund Freud

“Each night, when I go to sleep, I die. And the next morning, when I wake up, I am reborn. This means the when you go to bed you close your eyes, and you are and look like you are dead, but then when you wake up, it seems like you are reborn because you are up and ready.” – M.K. Gandhi

“Depression is a jail, where you are suffering prisoner & cruel jailer at the same time.”

“You had changed my world when you entered in my life, but you made it depressed when you left.”

“I loved you, but you know what exactly you were doing to me, and that’s what hurt the most to me.”

“I wished someone noticed me, but as soon as you did, I wished you never did.

“I drank to drown my pain, but the damned pain learned how to swim.” – Frida Kahlo

“Getting better from depression demands a lifelong commitment, I’ve made that commitment for my life’s sake and for the sake of those who love me.” – Susan Polis Schutz

“Before you diagnose yourself with depression or low self-esteem, first make sure you are not, in fact, just surrounded by assholes.” – William Gibson

“Mental pain is less dramatic than physical pain, but is more common and harder to bear.” 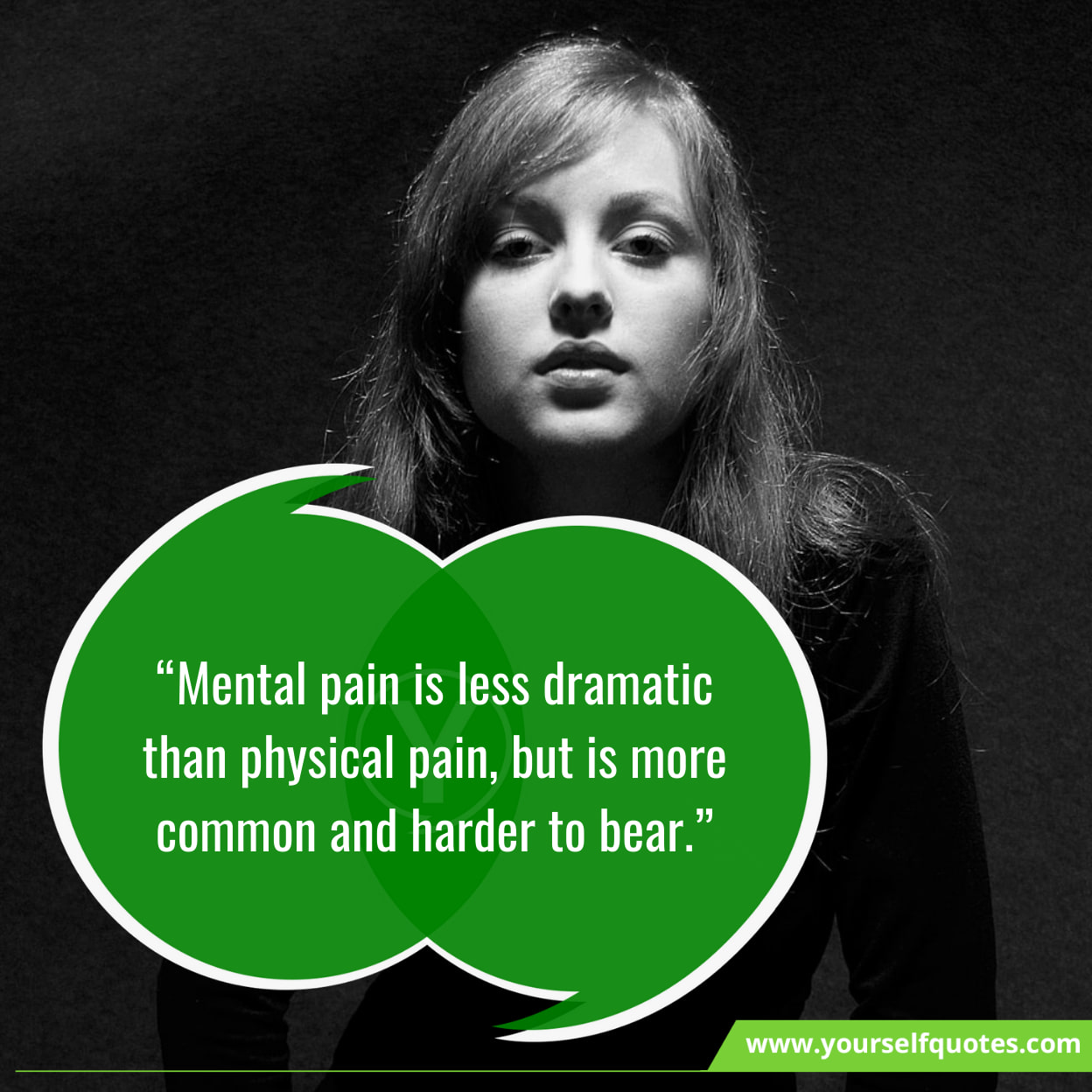 Depression is not a disease; it is just an emotional trauma that a person undergoes when he feels himself in darkness & anxiety. The more we care for the happiness of the other, the greater is our own sense of well-being. So if you come through a person down the lane who is suffering from such an emotional phase, then do share with them these Thrilling Depression Quotes which will change their attitude towards life. And always remember the best thing you can do for yourself is to help another person. Always raise a hand in the help of others, and feel an unseen strength coming back to you.

Find more exciting Depression Quotes. Do share these quotes with your friends & family and the one who needs a helping hand.

Which are your favorite Depression Quotes? Leave a comment below.

As One Writer Grapples with Her Disability, She Rediscovers Passion, Peace and Contentment

Are Back Market Products Worth The Hype?

Your Complete Guide To Relationship Needs And Wants With A List