I have an almost morbid curiosity about how I’m going to deal with any adversity I’m facing.

I often ask myself, ‘What am I going to do with this?’  That question is never far from mind, whether I’m happily making dinner or wondering how I will get through whatever I’m facing that is giving me anxiety or insomnia.

I’ve always thought of myself as tough, but maybe resilient is a better term. The results of my approach thus far is that I’m an excellent cook. I’ve also written nine books, two on resilience. I am a psychologist in Upstate New York, in the area just below Montreal in the Adirondacks.

My resiliency has been tested over the last four days. I’ve been crying, wrung out by the unexpected deaths of four loved ones. I haven’t slept in three weeks, and I’m practically living on stale chocolate. My reserves are all but shot after another loved one died last weekend. Expecting four more that will come at any time is simply overwhelming me.

This has been a tough month, and it’s not even over.

What Am I Going to Do with This? 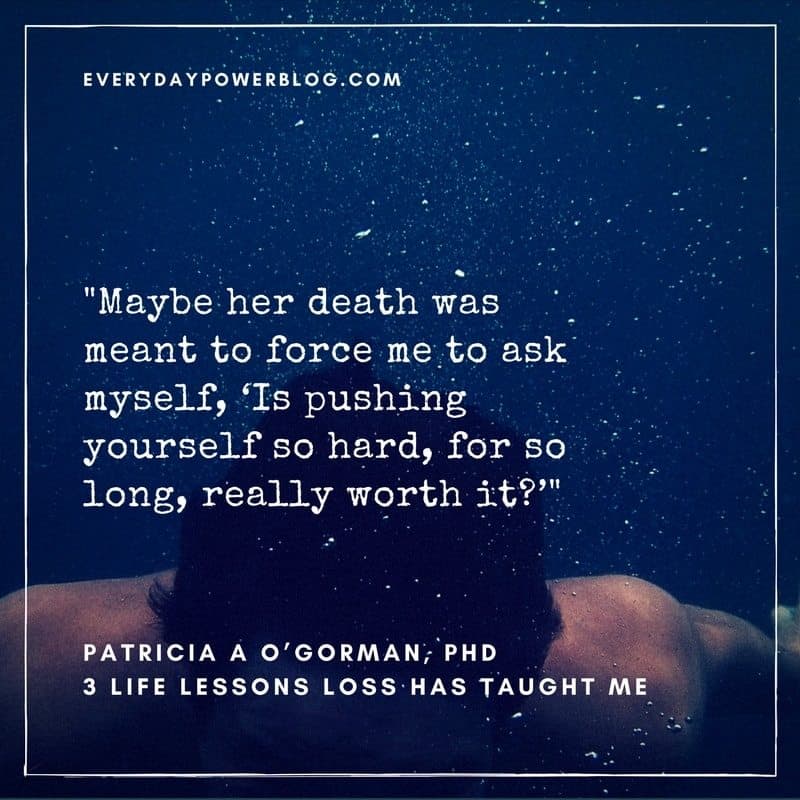 Nothing (but then again, maybe it’s everything) has prepared me for what I’m facing. Death in all of its unfairness. Death, not just of the old, but of the young and the vibrant, too.

Each of these deaths shattered me in some way

One was a former patient who overdosed. He was in his 20s: a funny, brilliant, gorgeous man. I’ve spent much of my professional career working with recovering addicts. Even though I want to focus on the hundreds of success stories, it’s patients like this one who haunt me.

Another; the young daughter of a colleague of mine died in the hospital in pre-op as she waited for a routine surgery. How does that happen? Young people aren’t supposed to die like that.

I still remember the stories my colleague told me over dinner one night about how proud he was of her because after spending “all that money on law school,” she worked helping the poor. As a result, she struggled to pay off her student loans. But she was happy and so was her father. Her life had meaning.

The impending death of Tom, my beloved foster son, who is now in his 40s and has brain cancer. Brain cancer! Everyone on his small work team at a chemical factory wore hazmat suits and showered before they left work. Every one of them has cancer. But the company denies any culpability. Their response is everyone has cancer somewhere different in their body! As if this exonerates them.

A generation of first cousins—my first cousins—are passing away at an alarming rate. They have lived their entire lives next to each other in a small fishing village in Canada. The first, a lobster angler, just died of throat cancer. Three others are near death from COPD, kidney failure, and cancer. This village (which has served as home to my family for 200 years) has only a couple hundred residents. It now seems even more still and quiet.

Then last weekend, my buddy Tribal O’Gorman, our 17+ year-old-adult rescue dog of indeterminate breed and indomitable spirit, died. I was the one who had to decide to put her down. Or should I say euthanized? I still don’t know what word to use.

I began sobbing then. I could hold back tears for the first three deaths, but I couldn’t for Tribal. We were soul sisters. No matter what, we kept plugging along. But maybe that is her last gift to me. Maybe her death was meant to force me to ask myself, ‘Is pushing yourself so hard, for so long, really worth it?’

Life Lessons: What Have I Learned?

I’ve learned three big life lessons in these past 30 days. I have a new goal, that I’d like to share with you in the hope that this can enrich your life as well. 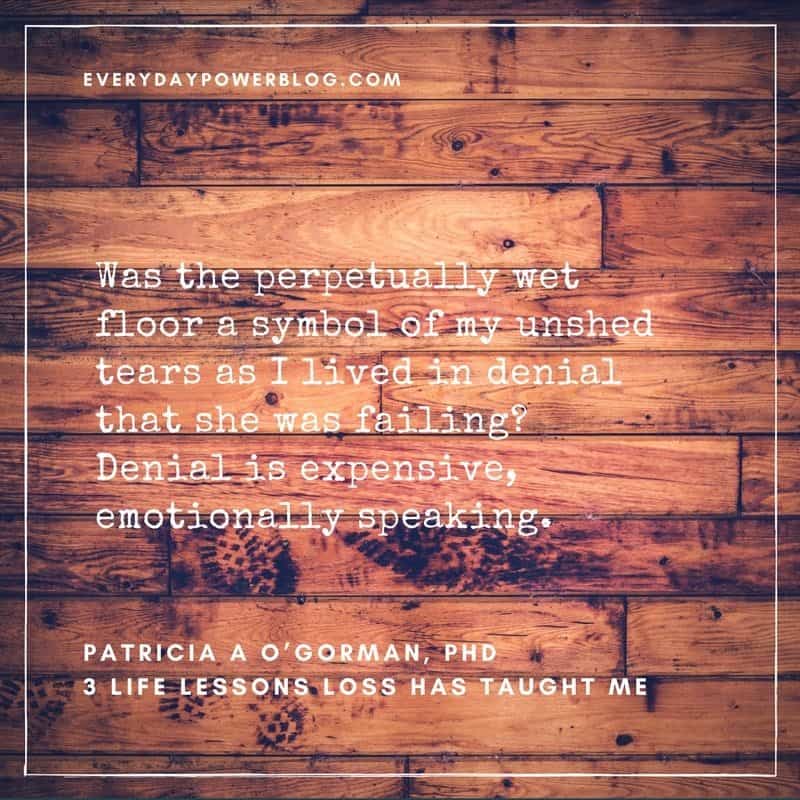 For months I have been waking up an hour earlier than I previously had needed to, hurriedly taking Tribal out for a walk.

It is so unbelievably cold in this part of the mountains that the walk was often quite short. Then I would spend up to an hour mopping up the kitchen floor—because no matter how early I was up, Tribal had needed to go out before that time.

I took her from vet to vet. Each tried something new: a new pill that would improve her life, or a different dosage—often disagreeing with one another. But my persistence didn’t stop her decline.

Each morning after our short walk, I would make a sudsy, hot solution. Dip in the mop and then mop and mop her pee. It was only when her bowels released inside against her will that I used paper towels. It was then that I realized that a dry paper towel absorbs more than a wet mop. Why had I never thought of that?

Was the perpetually wet floor a symbol of my unshed tears as I lived in denial that she was failing? Denial is expensive, emotionally speaking.

2. When your heart is breaking and you hear a little voice that says, “Yes, I can”—RUN.

I have prided myself on being able to get through anything that life throws at me. No, I’m not smug, just seasoned in dealing with trauma—LOTS of it. The little voice inside me says ‘You can do this!’ I believe it. Usually it’s right. But not this time.

My little voice helped me decide to do something that I almost never do: I changed my patient schedule to allow me to see my more serious patients all in one day. I did this so I could re-schedule the others and take time away from my practice.

Week One: I drove to Montreal by myself for the first time and took a direct flight from there to the Maritime provinces, my ancestral home where my family still lives. I attended the first funeral and was grateful I could see my other beloved family members while they are still alive.

It was wonderful in the way of simple gestures, love, and decades-old complaints can be.

Week Two: I flew down south and spent time with my sweet Tom. We spoke about whether it is better to know you were going to die or better not to know. He’s in hospice and has lost the use of his left arm. His doctors say his left leg and eye will go soon.

Tears, wisdom, hugs, love. He and his wife are so loving and courageous as he dies piece by piece. I was there, present, still not sleeping.

Week Three: Three more deaths… and tears that won’t stop. I even teared up when a long-time patient told me yesterday, “You’re just not yourself.”

I thought I was holding it together, looking okay, functional. Ha! I’m eating lots of chocolate, but a friend tells me not to worry about the calories. She said, “You burn up a lot of calories when you cry.”

Telling my sons about the death of their childhood dog was almost impossible, even for me. Thank God for my husband is doing much of the heavy lifting with this. But their pain on top of mine—it’s just too much.

Week Four: I’ve had to process that I, too, am human. That I just can’t push and not expect consequences. I can’t say that I would do things any differently.

But I think I would try to slow down and ask myself how I’m doing, instead of blocking out me, and attending to me later, and then not sleeping. “Getting it all done” will not happen again if it costs me this much.

I’ve been dealing with each death separately, but I crashed on Saturday when Tribal died—it was simply more than I could bear. Writing this is the first step in my healing process. 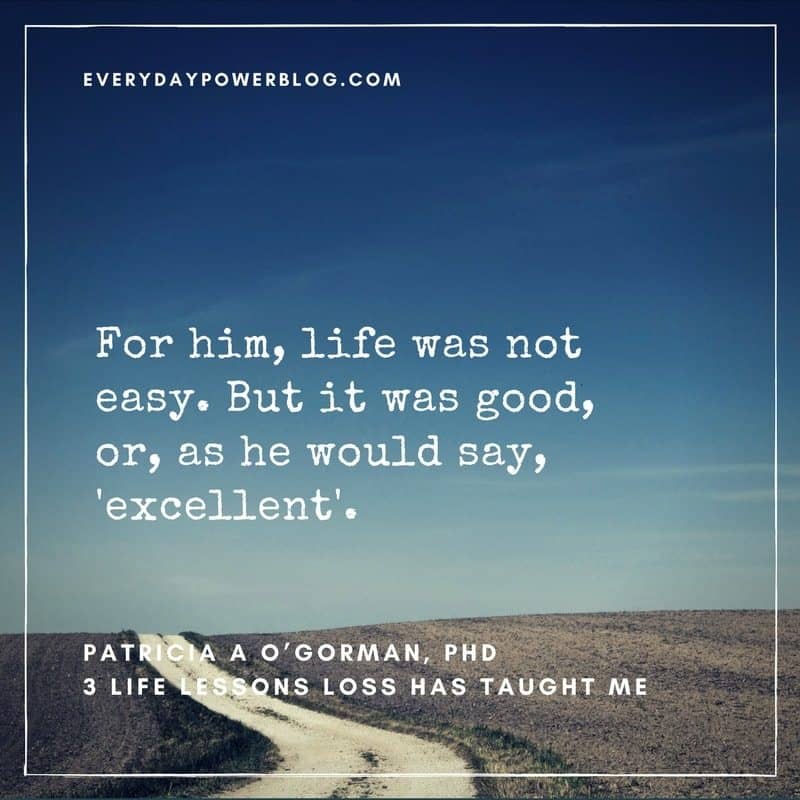 As I sit here writing this, looking terrible with puffy, red-rimmed eyes, I’m reminded of the messages about resilience I’ve shared in my books. The words of cousin Burt in Canada come back to me. When asked how he was, he’d say, “I’m excellent, all together!”

I used to wonder how he could be so good: a hardworking man of the sea, a gardener, a man who used his hands and his back his whole life. For him, life was difficult. But it was good, or, as he would say, excellent.

This is now my goal: to be ‘excellent, all together’ by being more present to myself, listening with greater awareness to my own needs, to my pain, making more space for myself as I continue to care for and love those around me. It’s no longer either/or for me, as I’m sure it never was for Burt.

Perhaps this is the greatest gift of this series of deaths, a way that I can give this pain meaning to enrich life—that by being more fully present to myself, as well as to others, I can truly say I’m excellent, all together!